Luckily, in the last decade the hammock innovators and entrepreneurs have been hard at work to design a flat hammock that even stomach sleepers can enjoy.

The best lay flat hammocks have been winning awards from places like Outside Magazine and Backpacker Magazine almost every year.  Old school hammock campers have been slow to adopt them, but they are serious pieces of equipment that open up new possibilities.

The Blue Ridge Flat Hammock by Lawson Hammocks is one of the original flat hammocks, and it’s still the best.  They hold the patents for the spreader bars and arch poles that made flat hammocks work.

Amazingly, this hammock hangs with just two ropes like a normal hammock.  It’s quite a fit of engineering to make it stable.  It’s nearly impossible to tip over.

It offers better protection from bugs and bad weather then other flat hammocks, and is comfortable enough to sleep in for long trips.

We love that it’s simple (not over-engineered), light weight, and comfortable.  It packs up easily and you can tell it was designed by someone who camps a lot.  Just look at how well it packs up.  Here is the entire setup, in less of a footprint than a tent. 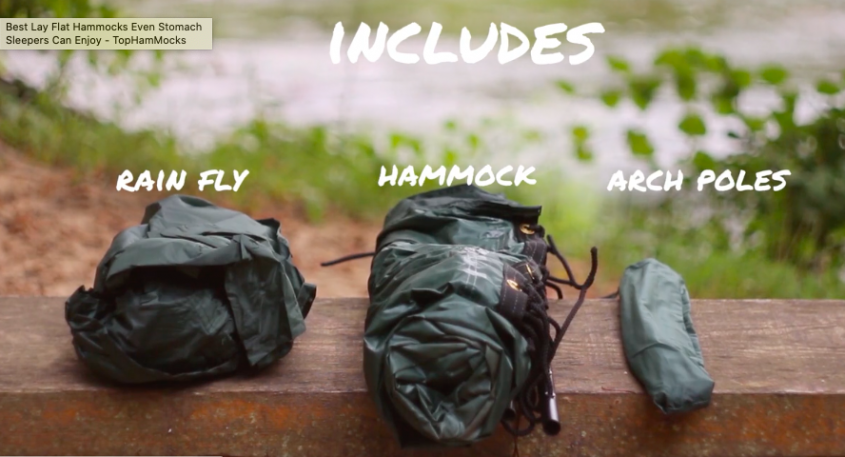 With the ridge line and mosquito net assembled, you have a Lawson Hammock Tent that basically a tiny house among the trees.

How To Set Up a Lawson Hammock 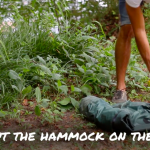 Lawson Hammock Setup is pretty straight forward.  Like a camping tent, start by rolling out the hammock on the ground 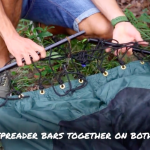 Next, snap the spreader bars together on both ends of the hammock tent. 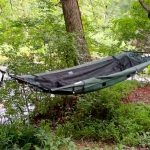 Attach the hammock to a tree and adjust straps accordingly 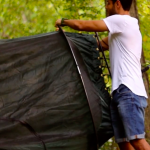 Like a tent, connect the arc poles and attach it through the grommet

This is a new design that came from a successful lay flat hammock Kickstarter campaign.  Sure, it looks a little funny but who cares when you’re having the best sleep of your life in the middle of the woods.

It’s a different concept than the Lawson Hammocks that takes a little longer to set up but worth the extra weight and time for most people.  First you lay out the tent structure like this:

Then you put in the sleeping pad, which (in addition to being super comfortable) actually provides some of the rigidity and structure to the system, along with the poles that slide in through the sides and across the ridgeline of the hammock.

What we love so much about hammock camping is that you can have CONSISTENT sleep anywhere.  With tents camping you have tons of variables, based on the slope, contour, and hardness of the ground.  Hammocks provide the same experience anywhere, and nowhere is this more true than with a Haven Tent Hammock.

Unfortunately, these still weigh as much as a tent so they’re not the best for long backpacking or through-hiking trips.  They also cost more than the Blue Ridge hammock above.

But the Haven Tent Hammock is great for a great night sleep for fishing, hunting, canoe, or kayaking trips.

Check them out at HavenTents.com 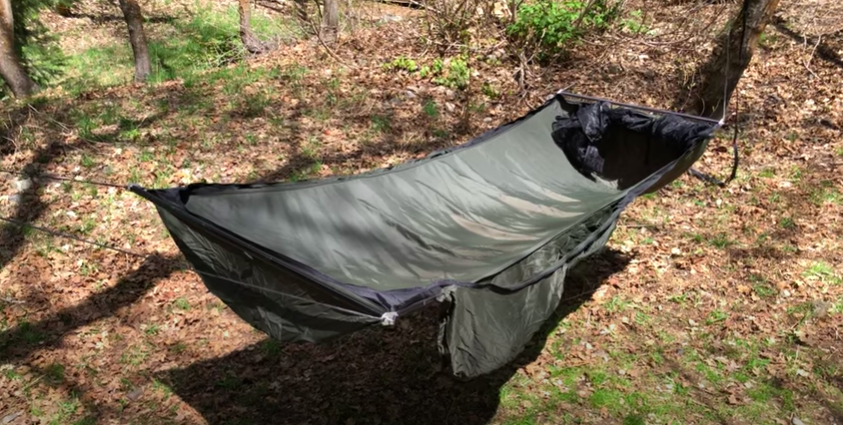 If you’re researching Lay Flat Hammocks, Warbonnet Ridgerunner is going to come up a lot.  It’s very popular with the hard-core hammock campers, even though it’s not a traditional camping hammock.

The saddle bags are an amazing feature that holds all your gear inside the bug net.  They’re huge compartments on both sides of the hammock.  VERY handy, especially because there’s no ridgeline that is typically used by hammock campers for gear storage.

The Warbonnet hammock also has an integrated pad compartment so you can bring your own sleeping pad and won’t slide out under you, like in most camping hammocks.  This makes it great for fall and early spring camping as well because there’s so much room for underquilt insulation.

It’s not as flat as the Lawson tent but it is probably more stable.  It’s a very nice, comfortable tent for back sleepers and side sleepers.

You also won’t be as claustrophobic in the hammock, compared to other camping hammocks that don’t give you much room to read or move around.  The Ridgerunner is pretty generous with with headroom, and that makes it easier to get in and out as well.

The flat camping hammocks above are a new concept, but if you love naps in the backyard, you’ve probably known about flat hammocks for a long time.

Sure, these hammocks have some curve to them, but most people find them much better for sleeping than banana style hammocks like these.

These are also the best hammocks for multiple people, kids, big and large people, and sun bathing. 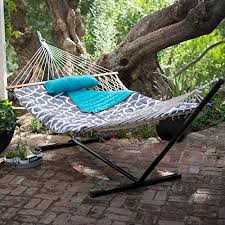 Without a doubt, the best backyard flat hammock for sleeping (especially for tall people) is the Algoma 11 Ft Rope Hammock.  The extra length is what makes this flatter then other hammocks of this style.  This hammock is actually flat enough for side sleepers and even stomach sleepers.

Comes with a sturdy, good looking backyard hammock stand that’s big enough for the large, 11 ft hammock.  This is a popular hammock at L.L. Bean.  It’s easy to put together with no tools, you’ll be napping in no time.

This is a really unique concept that we love, though we feel like they have some improvements to make.  The Klymit Flat Hammock reviews agree that the material sags too much, and it’s difficult to find the right place to hang it.

But it is super comfortable, fun, and easy to get in and out of.  This is a fun backyard reader or hammock for kids.  It has potential to be a really great flat lay camping hammock in the future, let’s see where they go with it.

If you’re not happy with camping hammocks, and wake up with a sore back – you should try one of the best lay flat hammocks above.  These can work even for side sleepers and stomach sleepers, and are more comfortable than traditional camping hammocks for a lot of people.

There is a weight penalty compared to the best light-weight hammocks, but your sleep is worth it.

PROS
User Rating: Be the first one!
SaveSavedRemoved 0